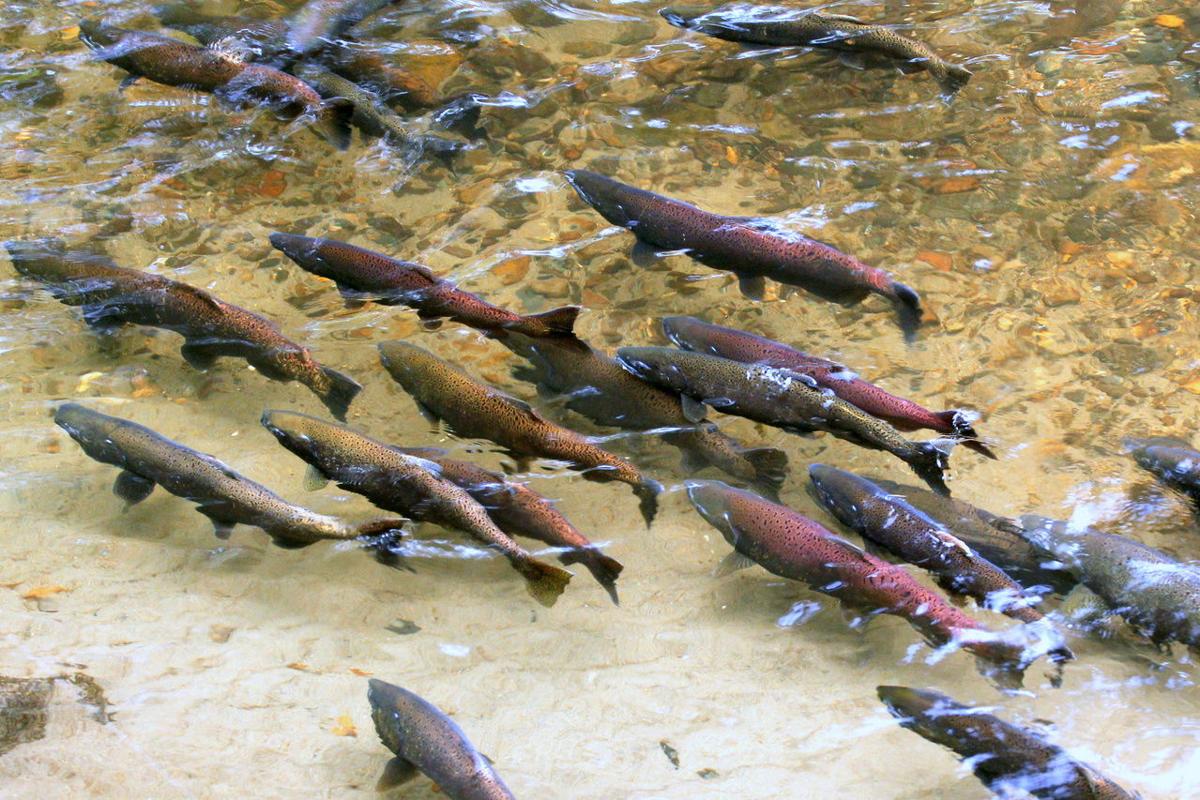 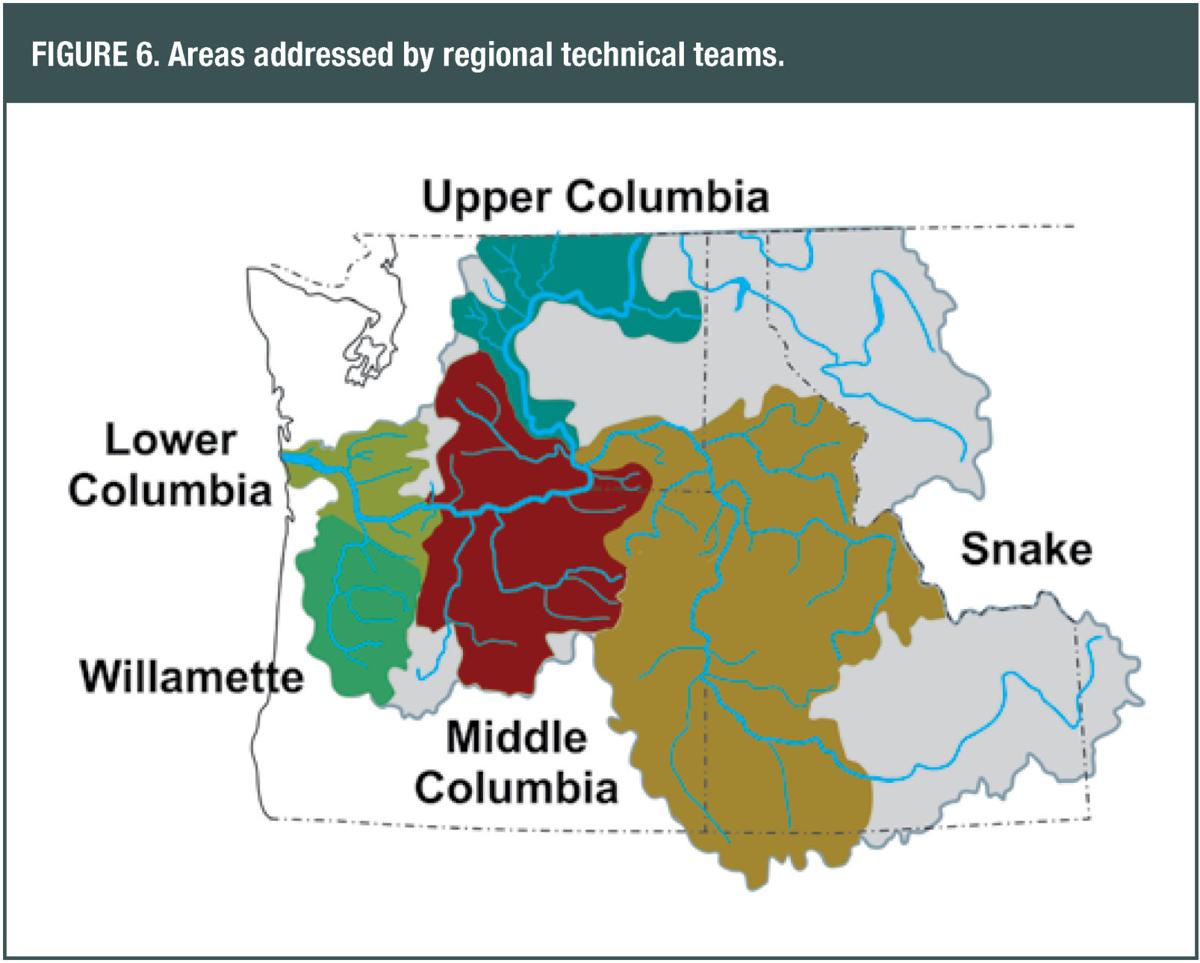 A goal of the Northwest Power and Conservation Council's Fish and Wildlife Program since 1987 has been to help ensure an average of 5 million adult salmon and steelhead—both natural-origin and hatchery—return to the mouth of the Columbia River each year.

The Council now is poised to refine that number, and give it depth with high, medium and low goals for naturally spawning returns, and future goals for hatchery adults and juvenile releases.

Part I of the program's 2020 Addendum—on track for adoption by the Council in August—now offers specific numerical targets for both listed and nonlisted stocks throughout the basin.

In general, the goals foresee a slight increase in hatchery returns, and a much larger reliance on naturally spawning fish to recover the total annual run to a minimum of 3 million and a high of nearly 8 million fish.

The newly added targets include total goals for hatchery and natural-origin returns for five sub-regions of the Columbia Basin, along with low, medium and high targets for adult returns of 27 natural-origin stocks, and targets for future hatchery juvenile production of 29 hatchery stocks.

These abundance goals were provided by the Columbia Basin Partnership Task Force, which for over three years has been developing both quantitative and qualitative goals to recover salmon and steelhead in the basin. Convened by NOAA Fisheries' Marine Fisheries Advisory Committee in 2017, the task force updated its numbers in early June, enabling the Council to include them in the Addendum.

"I think there's little doubt it's the most comprehensive technical assessment of [salmon and steelhead] production in the basin—both the estimated historical and current numbers, and the potential for reaching higher goals," Guy Norman—a member of both the task force and the Council—NW Fishletter.

Total numbers show that the partnership, and potentially the Council, wants to see at least 1.18 million naturally spawning salmon and steelhead returning to the Columbia Basin, which is three times the average of 380,000 that currently make their way back annually.

The high goal is for more than 6 million wild fish to return. The goals also envision almost 1.9 million hatchery adults supplementing wild populations each year, only slightly more than the 1.5 million hatchery fish that now come back, on average.

Norman noted the goals were arrived at, basin by basin, during many subcommittee meetings where fish and wildlife managers from state, tribal and federal agencies were invited to participate. They deliberated on current and historic numbers, and examined potential for restoring each of the runs. The low numbers, he said, are considered recovery goals, levels at which the 13 species listed as threatened or endangered could be candidates for delisting.

"There wasn't one prescription for coming up with these numbers. There's a little different strategy, or way that people assess this, depending on the watershed or managers," he said. Once the numbers came together, their historical estimates added up to about 9.5 million salmon adults annually, similar to estimates by the Council's independent scientists and other sources, Norman said. "The weight of evidence lends credibility to it," he added.

With its goals, the partnership isn't aiming to populate the Columbia with the same percentages of specific fish species. Because of the currently available habitat, high goals for some runs are far below what they once were, while others may approach, or even exceed, historical numbers, Norman noted. "The potential to rebuild existing habitat in some areas are much higher than other areas," he explained.

However, the goals do reflect an expectation some salmon populations will be restored above Chief Joseph and Grand Coulee dams in the upper Columbia River, where anadromous fish are now blocked from accessing, Norman said.

The upper Columbia is also the only region where goals for hatchery production include a large boost—from 265,700 current adults to 610,400 returns. The higher hatchery numbers would be needed to jump-start some of the reintroduction programs, Norman explained.

Additionally, he said, for some tributaries in the lower Columbia River, including the Cowlitz, Lewis and Deschutes rivers, the goals assume new access to blocked areas.

The addendum includes more than goals for salmon and steelhead returns. Last December, the Council adopted Part II of the Addendum, but extended the time for completing Part I after comments reflected a desire by fish managers throughout the region to better identify goals, objectives and indicators by which the Fish and Wildlife Program can be assessed.

After several workshops, a revised draft of Part I was approved for release.

Only a handful of people spoke at a June 15 public hearing on the revised draft—likely a reflection of the collaborative effort by the Council's staff and the significant input from managers throughout the region to develop a superior product, Norman said.

The addendum also sets abundance goals for the first time for white sturgeon and Pacific lamprey, and includes ecological objectives, such as providing sufficient flows.

Norman said the task force hopes to endorse a draft of the second phase of its report in late July, which includes not only the final quantitative goals, but also potential scenarios for how the goals might be achieved, and potential impacts to various interest groups involved.

More than two dozen members of the task force represent different interests from across the basin, including environmental, fishing, agricultural, utility, recreation, and tribal and government agencies.

Joe Lukas, general manager of the Western Montana Electric Generating Transmission Cooperative and a member of the task force, agreed that even if salmon recovery in the Columbia Basin reaches the high-end goals, Montana won't be seeing any of those fish.

Lukas said he's a fishery scientist, but he brought the perspective of Bonneville Power Administration ratepayers to the table. "I'm trying to help the task force understand that the amount of funding and burden placed on ratepayers is largely taken for granted. There's not an appreciation for the level of burden they carry. I try to keep that front and center," he told NW Fishletter.

He hopes the group recognizes there has been an intense focus on the impacts of hydropower, and less attention given to other causes of salmon declines.

"It's not helpful, it's harmful. We've been too siloed and focused on a single 'H' here," he said, referring to the so-called four H's of human impact on salmon stocks in the Columbia and Snake rivers— harvest, habitat, hydro and hatcheries. "We need a lot more community involvement to have any hope of achieving these numbers," he said.

It also notes that the task force, while developing the abundance goals, "has not allocated responsibility for meeting those targets among the Columbia hydropower system and other mortality sources."