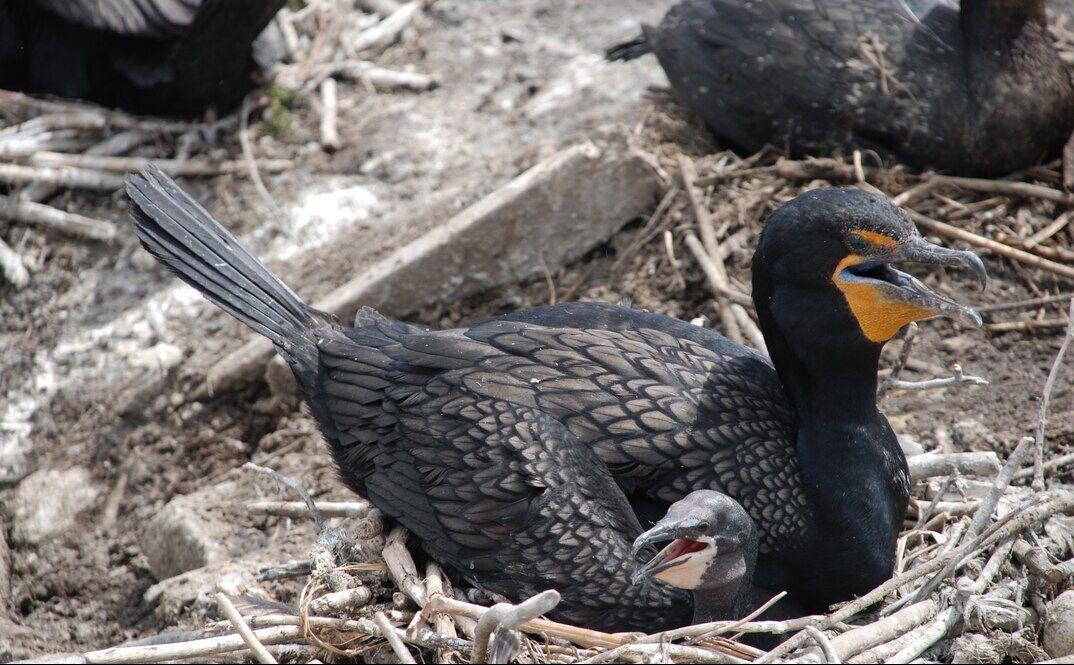 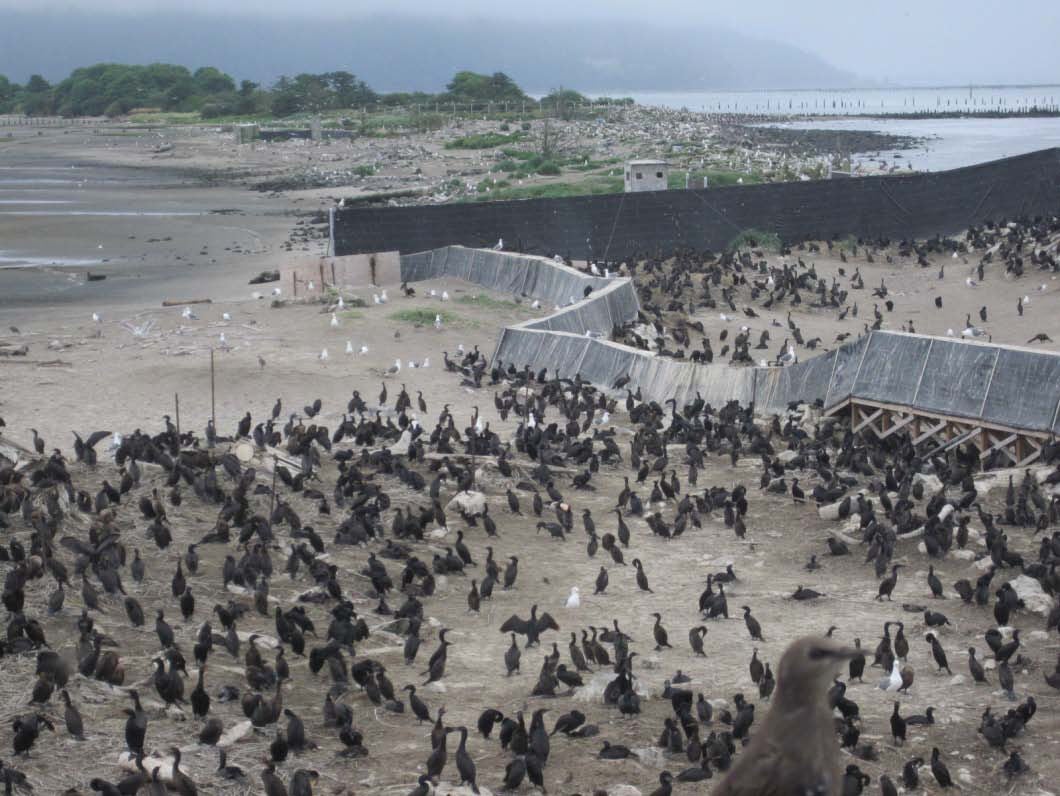 The U.S. Fish and Wildlife Service finalized a new rule that allows greater lethal take of double-crested cormorants nationwide, and greater flexibility for states and tribes to manage the birds.

Cormorants are protected under the Migratory Bird Treaty Act, and the rule provides a special permit that states and tribes can use to address conflicts with the birds when protecting human health and safety, personal property, and endangered or threatened species.

But the new law doesn't resolve how fish managers will deal with the Columbia River's major new nesting colony of cormorants at the Astoria-Megler Bridge, where they're likely having an even bigger impact on ESA-listed fish than they did when nesting on the estuary's East Sand Island.

The colony—which migrated to the bridge from the island about two years ago—is now farther upstream in the estuary, and farther from the ocean, with fewer food choices aside from the Columbia's juvenile salmon and steelhead migrating to sea.

"We would prefer to see double-crested cormorants nesting somewhere else—farther downriver, where they would have a far lower impact on salmon," said James Lawonn, avian predation coordinator for the Oregon Department of Fish and Wildlife, told NW Fishletter.

Because cormorants prefer marine species, their food choices decrease significantly as they move upstream, he explained.

In 2019, an estimated 3,542 breeding pairs nested on the bridge, increasing to about 5,000 breeding pairs in 2020. That's up fifteen-fold, from an average of 333 pairs that nested there from 2014 through 2018. Lawonn said they don't know how much bigger the colony will get. But the new law will give fish managers more assurances that they're not inadvertently killing too many cormorants if they try to scare the birds away from nesting on the bridge. Those efforts could potentially result in fewer deaths of adult cormorants, he added.

Oregon currently has no formal management goals, and no concrete plan for discouraging the birds from nesting on the bridge again this year, although it's being actively discussed, as the bridge is scheduled for federal inspections. Lou Torres, a spokesman at the Oregon Department of Transportation, said in an email that his agency is still digesting the new rule. "We are currently working with Oregon Department of Fish and Wildlife to address a long-term cormorant strategy for the Astoria-Megler Bridge," he wrote.

Lawonn said that strategy could involve scaring the birds off the bridge and encouraging them to return to East Sand Island, where the U.S. Army Corps of Engineers has worked for years to reduce their numbers but still maintain a significant colony. He said Rice Island—which is about 13 kilometers, or 8 miles, upriver from the bridge—once had more than 1,000 breeding pairs of cormorants, but is not a good solution since each bird could potentially consume even more juvenile salmonids.

Cormorants have long been identified as a problem for ESA-listed fish in the Columbia Basin, especially in the estuary, where the Corps studied their impacts and developed a management plan for reducing their numbers. On East Sand Island, the cormorant colony grew from about 100 pairs in 1989 to a peak of 14,916 nesting pairs in 2013 to become the largest breeding colony in North America, accounting for more than 40 percent of the western population, the Corps reports.

Its management plan called for reducing the colony to 5,600 nesting pairs by killing adults, oiling their eggs, and reducing the size of their nesting area. By 2018, breeding pairs dropped to fewer then 4,000, the Corps told the Northwest Power and Conservation Council in November 2018.

In an email, Corps spokesman Tom Conning said that the Corps continues to manage cormorants at East Sand Island to maintain about 6,000 nesting pairs of double-crested cormorants. "The Corps lacks authority to manage cormorants beyond those dredge material islands under the jurisdiction of the Secretary of the Army," he wrote. Conning said the Corps does monitor cormorants at other known nesting, roosting and loafing sites in the estuary, including the Astoria-Megler Bridge, and is engaging in "social attraction measures at East Sand Island" to establish the target number of nesting pairs, in keeping with Phase II of its management plan.

He added that the Corps will only engage in the amount of take permitted under its Migratory Bird Treaty Act permit issued by the U.S. Fish and Wildlife Service. "At this time, the Corps has not received a renewed MBTA depredation permit for any take in 2021," he wrote.

The Corps recently submitted an application to renew its depredation permit, but under Phase II of the management plan, the Corps does not intend to kill more adult cormorants, he said. It would use the permit as needed to remove cormorant eggs.

Lawonn said that the new rule gives Oregon and other fish managers an additional tool to help improve salmonid survival in the Columbia River estuary. "We're hoping this permit will help us manage cormorants in a manner where we can reduce, or not even need to use, lethal take on adult birds," he said. The permit could allow them to push adult cormorants away from the bridge and destroy their nests without the worry of taking more cormorants than allowed, he said.

Lawonn added that the Corps' management plan had a very definite goal of increasing salmonid survival, and since the cormorants dispersed to a new location that likely has a higher impact on salmon and steelhead, "That goal doesn't seem to be met," he said. "That brings up the question of who is responsible now for this issue. From our point of view, it doesn't seem like something Oregon should have to shoulder on its own," he said.

The new rule requires wildlife managers to first attempt other means—such as hazing and changes to habitat—to prevent problems caused by growing numbers of cormorants. It provides for a maximum allowable take nationwide of 121,504 cormorants per year, including 4,539 birds in the Pacific region. That's about half the 8,881 birds the federal agency proposed for allowable lethal take annually in the Pacific region in its draft. The number was reduced in the final rule after public comments suggested the formula used for determining take in the western population "may not have captured complex and changing population dynamics precipitated by cormorant management in the Columbia River Estuary."

The agency says the lower take number shouldn't be an issue, since average annual take now is less than 2,000 birds.

According to the U.S. Fish and Wildlife Service environmental impact statement accompanying the new rule, the number of breeding pairs within British Columbia, Washington, Oregon and California increased by about 72 percent from 1987 to 2009. "Growth of the western subpopulation of cormorants is largely attributed to the increase in size of the cormorant breeding colony at East Sand Island," it said.

Each cormorant consumes an average of one pound of fish per day. But according to an article in Audubon magazine, there's no clear link between the cormorants' eating habits and declines in wild fish populations.

Still, cormorants have been identified in several studies as the main avian predators of juvenile salmon and steelhead in the Columbia Basin. One recent study found that the Columbia's predatory birds consume between one-third and one-half of upper Columbia steelhead smolts before they reach the ocean.

In a letter to USFWS supporting the new rule on cormorants, NWPCC wrote that in some instances, as much as 70 percent of upper Columbia steelhead smolts are dying from bird predation, which is more than all other causes of mortality combined, including dams, other predators and disease.

Guy Norman, a Council member from Washington who chairs its Fish and Wildlife Committee, told NW Fishletter that their Independent Scientific Review Panel is deeply involved in helping to determine the impact that cormorants and other avian and mammal predators have on the Columbia's ESA-listed fish.

"We're going to rely on our science team in helping us put it all together," Norman said, noting that a thorough look at avian predation in the Columbia Basin is on the ISRP's list of assignments this year.