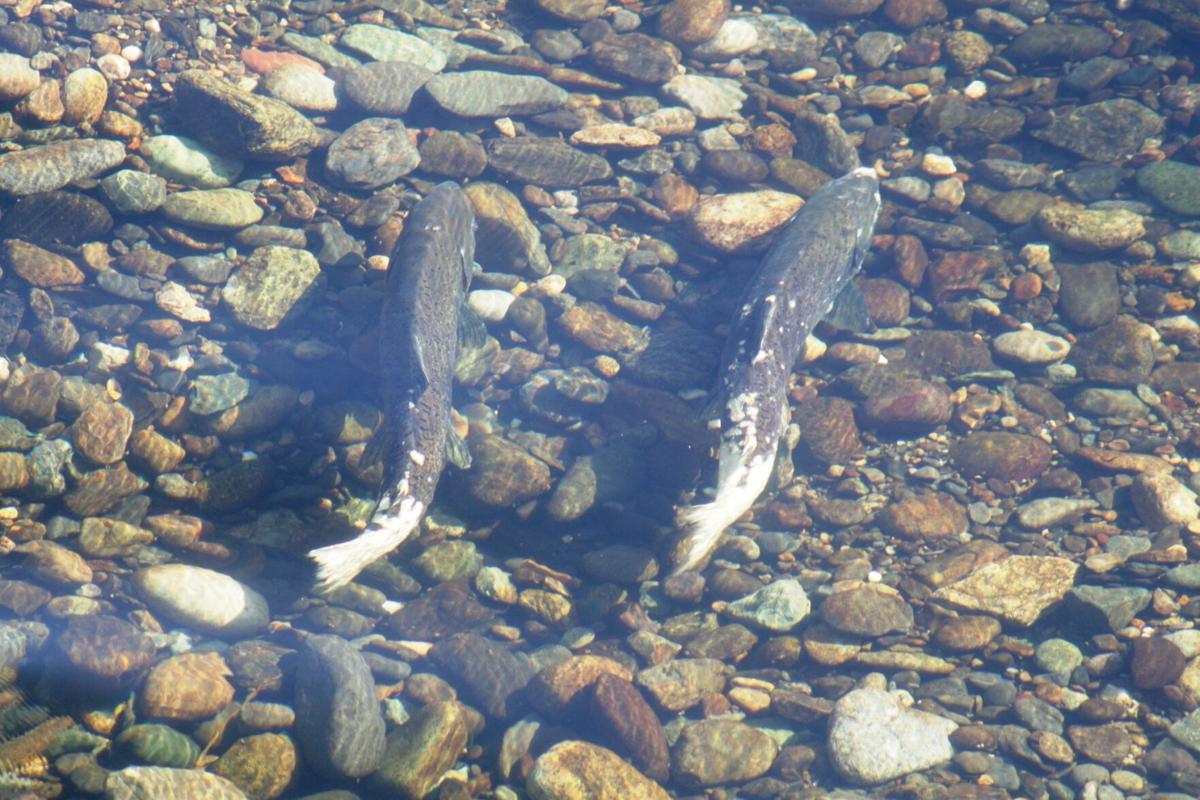 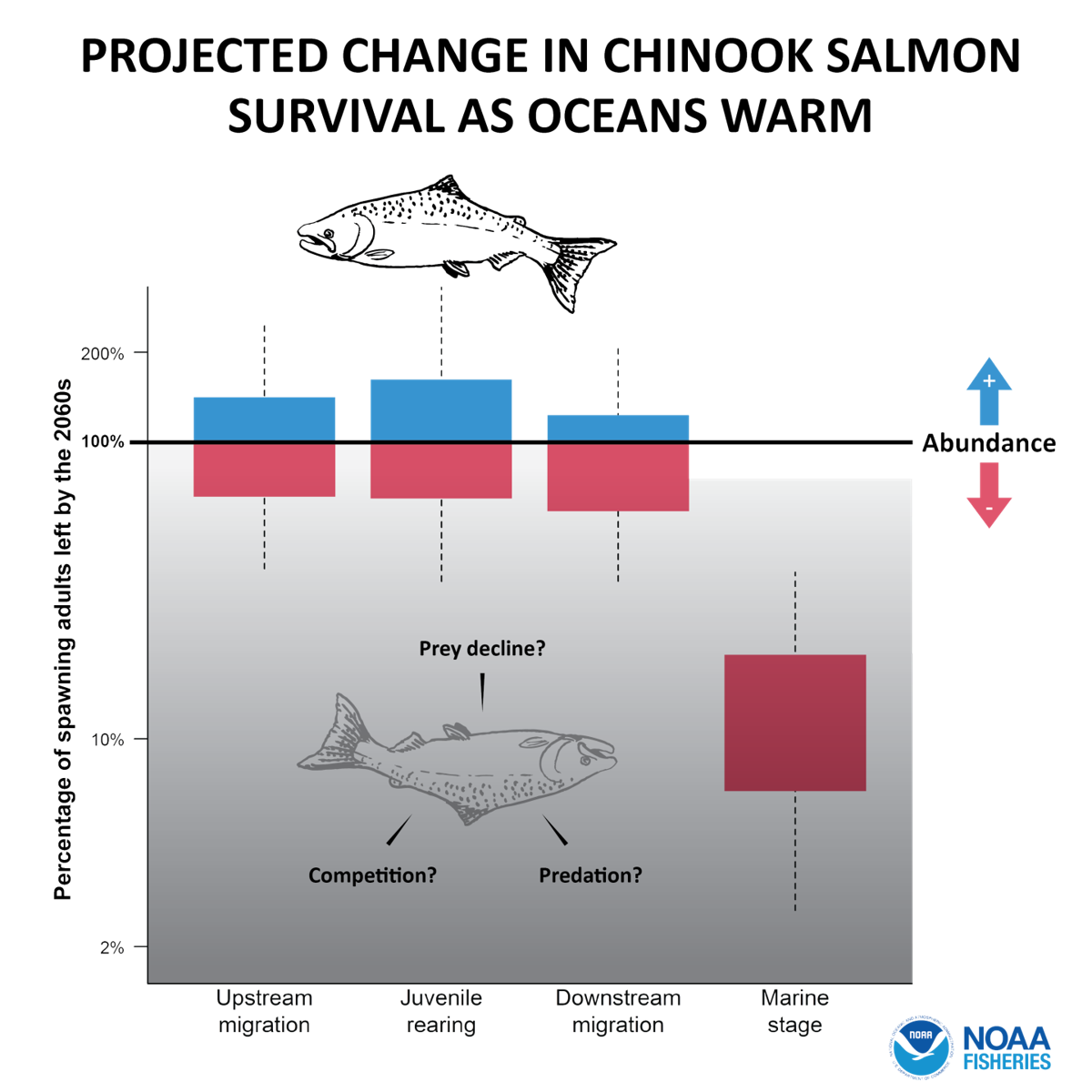 A newly published study by NOAA Fisheries scientists finds that Snake River spring-summer Chinook are on a fast track toward extinction, and ocean warming is the main culprit.

Climate change is likely to drive even the Snake River's most populous spring-summer Chinook runs to near-extinction by the 2060s under current climate scenarios, the study says. And while it examined data from eight populations of wild Snake River Chinook, scientists say this future will likely be shared by spring Chinook and other salmon and steelhead populations throughout their southern ranges on both the Pacific and Atlantic coasts.

"We're looking at range contraction. That's going to happen across the globe. It's what we're concerned about," the study's lead author, Lisa Crozier, told Clearing Up.

It isn't just the wild fish at risk, she said. "Hatchery fish also need an ocean environment to grow in," she said. And with much lower survival rates than their wild counterparts, "It's a problem for hatchery fish, too," she said.

"That's not going to be enough," she said, adding, "It's a hard problem. There's no silver bullet. We have to address issues at every single life stage."

The study, "Climate change threatens Chinook salmon throughout their life cycle," was published Feb. 18 in the journal Communications Biology, by Crozier and co-authors Brian Burke, Brandon Chasco, Daniel Widener and Richard Zabel. It is the first to consider the impact of climate change on salmon in both the freshwater and ocean stages of their life cycle.

Crozier said in developing a model to include impacts from the ocean, scientists found a strong correlation between sea surface temperatures (SSTs) and salmon declines.

"This is not surprising, because SST reflects complex interactions between atmospheric forcing, wind strength, upwelling, and mixing of ocean layers, all of which affect productivity throughout the California Current," the study states.

Crozier said the findings point to an urgent need to study ocean interactions and find new ways to reduce the impacts of a warming ocean on salmon.

"I want to really focus on what's going on in the ocean. The truth is, we don't actually know which predators are eating them. We don't know which species they're competing with," she said, adding, "I'm personally pretty convinced there are actions we could take in marine survival, but we haven't really looked at it because we haven't done the research in the ocean that we have in freshwater."

Instead, funding for ocean research on Columbia Basin salmon has been cut. "We do a couple of surveys on juveniles a year. That's our ocean effort," Crozier said.

Meanwhile, in the Columbia River, billions of dollars have been spent to study freshwater impacts, and scientists now know what helps and what hinders salmon survival. "I feel like we've been so obsessed with the freshwater—and there are good reasons for that—but now we're ready to turn our attention to these problems in the ocean," she said.

The study notes that survival of juvenile Chinook through Columbia and Snake river dams generally meets targets of about 96 percent at each dam, or about 50 percent through all eight dams, which is similar to the estimated survival in rivers of the same length with no dams, such as the Fraser River in British Columbia. However, dams also impact travel time, increase temperature and can help salmon predators.

But regardless of efforts in the hydro system to speed juvenile travel or increase in-river survival, rising sea surface temperatures put all eight populations at high risk of extinction, the study says. "Our analysis showed relative resilience in freshwater stages, with the dominant driver toward extinction being rising SST, which tracked [an approximate 90 percent] decline in survival in the marine life stage," it states.

The study predicts those future declines using the climate change scenarios from the Intergovernmental Panel on Climate Change, which includes 26 global climate models to look at warming impacts to the eastern Pacific Ocean from greenhouse gases.

The study finds a similar fate for Snake River Chinook, but a different timeline, under an intermediate scenario—RCP 4.5—which assumes emissions peak around 2040 and then decline; and under a business-as-usual scenario—RCP 8.5—if emissions continue on the current trajectory.

Snake River spring-summer Chinook are headed for trouble under both scenarios. Under the higher emissions future, even the largest populations from Bear Valley Creek and Secesh River fall below 50 spawners in over 75 percent of the simulations by 2060. If emissions peak in 2040, "the same milestone was passed a decade later," the study says.

Near-extinction, in the study, is defined as fewer than 50 spawners for four years in a row, which puts the population at extremely high risk of total extinction from natural fluctuations in abundance and the loss of genetic variation. "Extinction is kind of a chancy thing, and we just don't want to go anywhere near it," Crozier said.

The findings are dire, especially given the life-cycle model is conservative in some ways. It does not account for any negative effects to salmon from ocean acidification. Freshwater impacts are also conservative, as both temperature and flows could have more severe impacts on salmon as the climate warms, the study notes.

There's also the possibility of an unforeseen "rescue"—the potential for climate change to have a positive impact on salmon survival through some part of their food web, or for salmon to evolve in a way that overcomes the impacts of a warmer ocean, the study notes.

However, the model already considers one evolutionary trait documented in salmon—a shift in migration timing. It predicts smolts will arrive at Bonneville Dam about 6.5 days earlier, which generally improves marine survival. It also predicts adult Chinook will migrate about four days earlier due to warmer freshwater conditions and lower flows.

"In conclusion, we have shown that prospects for saving this iconic keystone species in the conterminous U.S. are diminishing," the scientists wrote. "The urgency is greater than ever to identify successful solutions at a large scale and implement known methods for improving survival."

"Management actions that open new habitat, improve productivity within existing habitat, or reduce mortality through direct or indirect effects in the ocean are desperately needed," the study says. It notes that restoring all critical habitats should be a high priority, especially lower elevation habitat that was once highly productive. Improvements could also be found by reducing contamination, increasing floodplain habitat and increasing habitat complexity.

Crozier said although the study has dire predictions, "Salmon are tough. They're resilient. There are things we can do, and I'm optimistic. We just need to be more targeted, instead of it being a haphazard, opportunistic endeavor, which has been the approach to restoration."

Editor's note:NOAA's number of annual surveys has been updated.