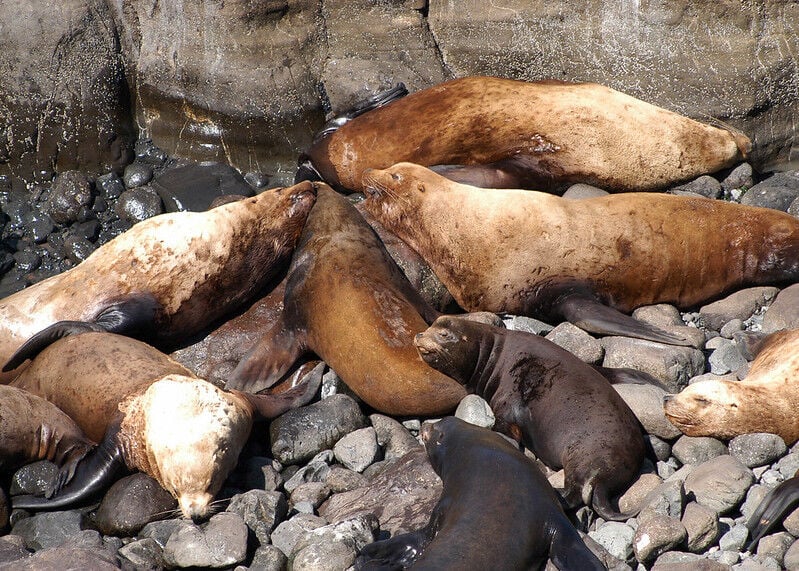 California sea lions on a trap at the base of Bonneville Dam.

California sea lions on a trap at the base of Bonneville Dam.

State and tribal fish and wildlife staff have long watched increasing numbers of Steller sea lions, which weigh as much as 2,500 pounds, gobble up salmon and steelhead at the base of Bonneville Dam, at Willamette Falls, and in other parts of the lower Columbia River.

In August, they received authorization for the first time to trap and euthanize this larger cousin of the California sea lion. After months of planning and some minor setbacks caused by the COVID-19 pandemic, a new five-year effort to rid the lower Columbia River of both kinds of sea lions is now underway.

"We are hoping to get out there this week and essentially work through the winter," Sheanna Steingass, marine mammal program leader for the Oregon Department of Fish and Wildlife, told the Northwest Power and Conservation Council on Oct. 12. Crews will begin by trapping and killing the smaller Stellers before trying to capture the larger ones, she said.

"We're learning to handle extremely large animals," she said, later adding, "We have a lot more collaborators and new staff, so it's going to be really important not to throw a 2,000-pound animal at them. A full-grown Steller is twice the size of a polar bear and probably just as ornery, so it's probably good to work up to that."

Steingass said they plan to capture as many Steller sea lions as possible over the winter, and then turn their attention to California sea lions when they begin to arrive in the spring.

Representatives from the Oregon, Washington, Idaho and the Columbia River Inter-Tribal Fish Commission met with the Council to describe their preparations and long-range plans for a coordinated removal, and to ensure the BPA funding is in place to build a larger barge and traps that can handle larger Steller sea lions.

In January, the Council approved a recommendation asking BPA to spend $52,000 on a new barge and traps large enough to hold Steller sea lions, once a permit was issued. In August, the National Marine Fisheries Service approved the new permit, authorizing three states and four tribes to humanely kill as many as 540 California sea lions and 176 Steller sea lions over the next five years in the main-stem Columbia River below McNary Dam, and in its tributaries (CU No. 1967 [12]).

Crystal Ball, executive manager of BPA's Fish and Wildlife Division, attended the Oct. 12 meeting and confirmed for the Council that Bonneville is ready to pay for the new equipment.

According to the permit request, scientists estimate that between 144 and 286 California sea lions and between 105 and 130 Steller sea lions now live in the Columbia Basin, some staying for as long as 11 months of the year. Since 2002 they have consumed an estimated 71,000 salmon and steelhead at Bonneville Dam alone.

Both kinds of sea lions habitually return to Willamette Falls and Bonneville Dam each year to take advantage of returning salmon and steelhead runs. Once a sea lion learns of the opportunities, it transmits that knowledge to other sea lions when it returns to its colony.

Since 2012, state agencies have gotten permits to trap and kill only California sea lions—which are half to one-third the size of a Steller—and only at Bonneville Dam, and later at Willamette Falls. Before killing an individual California sea lion at Bonneville, agencies had to capture and mark the sea lion, observe it at the location for at least five days, observe it eating a salmonid, and attempt to discourage it through nonlethal hazing.

Once all of these requirements were met and documented, they could request to add the individual to a removal list, and then euthanize it if it was recaptured. The permits allowed as many as 92 California sea lions to be killed each year.

Steingass said at the program's height, 59 California sea lions were removed, but most years only a couple dozen were taken. In total, the states have removed 238 California sea lions since 2008, including 15 animals placed in captivity, 216 animals euthanized, and seven animals accidentally killed during trapping.

"Now, instead of individual sea lions, we are managing these by area," Joe DuPont, Idaho Department of Fish and Game fisheries manager, told the Council. He said any sea lion seen below McNary Dam to the I-205 Bridge, or in any of the tributaries below McNary, is assumed to be having a negative impact on Endangered Species Act-listed salmon or steelhead, and can be removed.

According to NOAA's environmental assessment, California and Steller sea lions combined consume between 1,000 and 10,000 salmonids at Bonneville Dam each year.

Depending on the year, that equates to between less than 1 percent and nearly 6 percent of the total run. Their impact on individual runs can be far greater. At Bonneville Dam, sea lions are eating between 4 and 11 percent of the steelhead attempting to cross the dam. In 2017, scientists estimated that California sea lions picked off one-quarter of the winter steelhead run at Willamette Falls.

Under the permit, the states and tribes must be ready to hold the sea lions for up to 24 hours if notified that a zoo, research or educational facility is willing to take them. Otherwise, the animals will be killed under protocols developed by a committee that includes veterinarians, marine mammal biologists and others.

DuPont said that in three years, a pinniped task force that includes scientists, fishing and conservation organizations, tribes and states will evaluate the program, looking at aspects such as how many sea lions have been removed, whether removing them is helping salmon and steelhead runs, and whether the removal effort is having an overall impact on the larger sea lion population.

Another change in the new permit is that, along with the states, four Native American tribes are also authorized to remove sea lions.

"The response letters are under legal review right now, and we're hoping that will be taken care of quickly," he said, adding, "We'll be out with the states for implementation very soon, I hope."

Hatch noted that, although the sea lion removal program is complex and controversial, it is also a model example of the coordination and cooperation that can happen in the Columbia Basin. NMFS, the U.S. Army Corps of Engineers, BPA, NWPCC, states and tribes have all been working together under multiple funding sources to resolve the issue of pinniped predation, he said.

"The region has responded to this issue more unified and cooperatively than anything else in my 30 years of working in the basin," Hatch said.

Kessina Lee, southwest regional director for the Washington Department of Fish and Wildlife, said crews plan to focus their efforts at Bonneville Dam and Willamette Falls, where they have equipment set up, and experience trapping them.

"We feel that the source populations are largely at Bonneville and Willamette, and if we can really remove those animals, it will have an impact on what we're seeing in some of the tributaries," she told the Council. She said the same animals are thought to move around the lower Columbia to areas where prey is concentrated, such as the Cowlitz River when the smelt run arrives.

If concentrating their efforts on Bonneville Dam and Willamette Falls doesn't resolve issues in the tributaries, they'll need to figure out different techniques to trap and remove animals from those areas, she said. That's likely to involve a different kind of boat and potentially tranquilizer darts, she said.

Lee said the COVID-19 pandemic delayed progress only slightly. A state spending freeze prompted by the pandemic prevented her agency from fabricating a new barge large enough to handle Steller sea lions, she said. But crews don't really need the larger barge and traps to begin trapping the smaller Stellers this fall.

Focusing on capturing the smaller Steller sea lions first will help crews adhere to COVID-19 protocols, such as maintaining social distances, she said.

Join NWHA and NHA for a virtual workshop that focuses on a cross-section of topics relevant to the the hydropower industry in the Northwest. Topics this fall include national and regional hot topics, legislative updates, tools to communicate around hydropower and energy imbalance markets upd… Read more