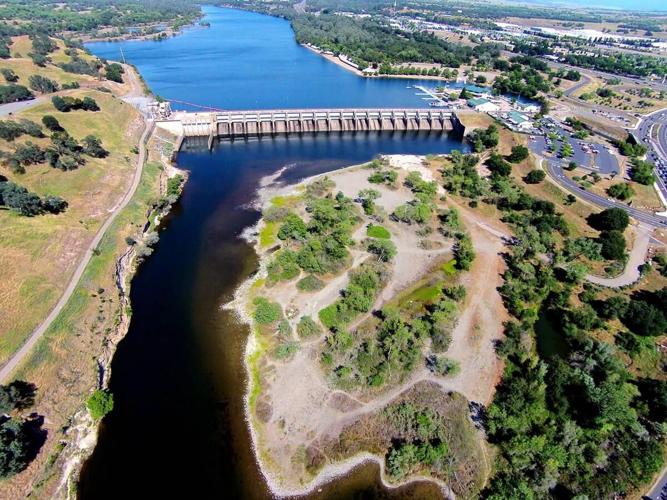 The Nimbus Basin on the Lower American River. 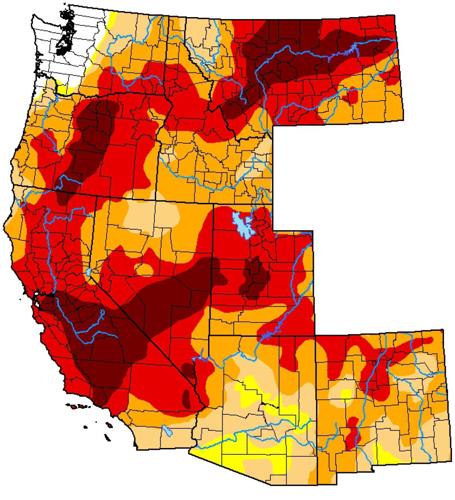 Drought conditions in the West as of Dec. 7.

The latest concern in the West's ongoing drought is the status of the snowpack.

Although it is early in the water year, the U.S. Drought Monitor said concerns about the amount of water being stored in snowpack is translating into water supply worries—specifically, "growing concern about water supplies after back-to-back dry winter seasons in California as well as in other basins including the Colorado River Basin."

The Drought Monitor's Nov. 30 to Dec. 7 report cited the California Department of Water Resources' Dec. 1 announcement of a zero-percent initial water allocation in 2022 for the State Water Project as evidence of the concern (see CEM No. 1670).

In its first forecast of the 2022 water year, DWR said the year is starting "low," particularly for the Sacramento and San Joaquin regions, "due in large part to the critically dry year last year."

The Sacramento Valley Index, which is at the "dry" level, is faring better than the "critically dry" San Joaquin Valley Index "because of the tremendous amount of precipitation received during the October atmospheric river (AR) that targeted the Feather, Yuba, and American basins," DWR said.

The agency said the record amounts of precipitation in the Sacramento Valley and Northern Sierra Nevada "resulted in above average runoff for the Sacramento and San Joaquin hydrologic regions that even lasted through November on top of the parched soils and landscape."

October was the first month since late spring 2020 in which the amount of monthly precipitation in the Sierra was greater than 150 percent of average. It was also the second-wettest October for the Northern Sierra, based on records reaching back to 1921. With 12.7 inches, it was just behind October 1963.

Having wet soil early in the season helps runoff efficiency, which DWR says will be helpful in December, January and February—typically the three wettest months in the water year.

The statewide average snow-water equivalent is 0.8 inches as of Dec. 8, which is 15 percent of average for the date. "December is typically when snow that falls tends to accumulate for the winter," DWR said. "Let it snow!!"

Other areas of concern "include the delayed opening of ski areas across the region which is impacting local economies in mountain communities across the West," the Drought Monitor said in its weekly report. "However, some positive signs have emerged over the past week and looking ahead in the short-term with a change to a more active weather pattern for the region with heavy mountain snowfall expected in the Cascades, Sierra Nevada, Great Basin, and the Rockies."

Areas of improvement, based on recent precipitation, include Washington, northeastern Oregon and west-central Idaho.

Montana conditions, however, continued to worsen, with expansion of the "extreme drought" (D3) level in the southwestern portion of the state based on poor snowpack at higher elevations.

Major reservoirs across the western U.S. are being closely monitored. Lake Powell is at 29 percent of capacity, according to the U.S. Bureau of Reclamation's Dec. 6 report.

The full Lower Colorado River system is at 37 percent of capacity, with 22,240 thousand acre-feet of water.

Reclamation has not updated its reservoir data since Nov. 28. Its storage visualization dashboard still shows that six Western reservoirs it operates had the lowest observed storage levels in the past 30 years of data collection as of either Nov. 22, 25 or 26, including Lake Mead-Hoover Dam; Lake Powell-Glen Canyon Dam; Blue Mesa Dam and Reservoir; Guernsey Dam and Reservoir; Canyon Ferry Lake and Dam; and Glendo Dam and Reservoir.

Salt River Project storage was at 72 percent of capacity as of Dec. 8, with roughly 1.44 million acre-feet of water stored in the system, according to SRP's daily report.

As of midnight Dec. 7, Lake Oroville's elevation was at almost 673 feet with roughly 1.06 million acre-feet of water in storage, which is 30 percent of capacity. Hydroelectric generation at Lake Oroville's Hyatt power plant could resume in December, depending on the lake's elevation (see CEM No. 1665). DWR has no firm date by which operations should resume, but still expects the plant to be on line later this month.

Reclamation is seeking participants in several initiatives designed to support its various programs.

It opened a request for letters of interest Dec. 7, asking eligible nonfederal entities to participate in its Basin Studies and Water Management Options programs.

The Basin Studies program is designed to help "develop projections of future water supply and demand, including the impacts of climate change, and to identify collaborative strategies to ensure sustainable future water supplies in river basins across the Western United States," according to the agency. It has funded 27 basin studies since the program was founded in 2009.

The Water Management Options pilot program builds on the basin studies to expand or update existing analyses. It is part of the U.S. Department of the Interior's WaterSMART initiative.

Letters of interest are due by Feb. 11 to the nearest regional office. Additional information is available on the agency's WaterSMART Basin Studies website.

Reclamation is also launching a new prize competition for improved snowpack-water forecast techniques throughout the West in partnership with organizations including the Bonneville Power Administration, U.S. Army Corps of Engineers, U.S. Geological Survey and National Center for Atmospheric Research.

By improving the techniques used to determine the amount of water stored as snowpack, water managers will have more accurate information they can use to make better water-management decisions.

Reclamation has awarded more than $4 million through 29 different competitions in the past six years.