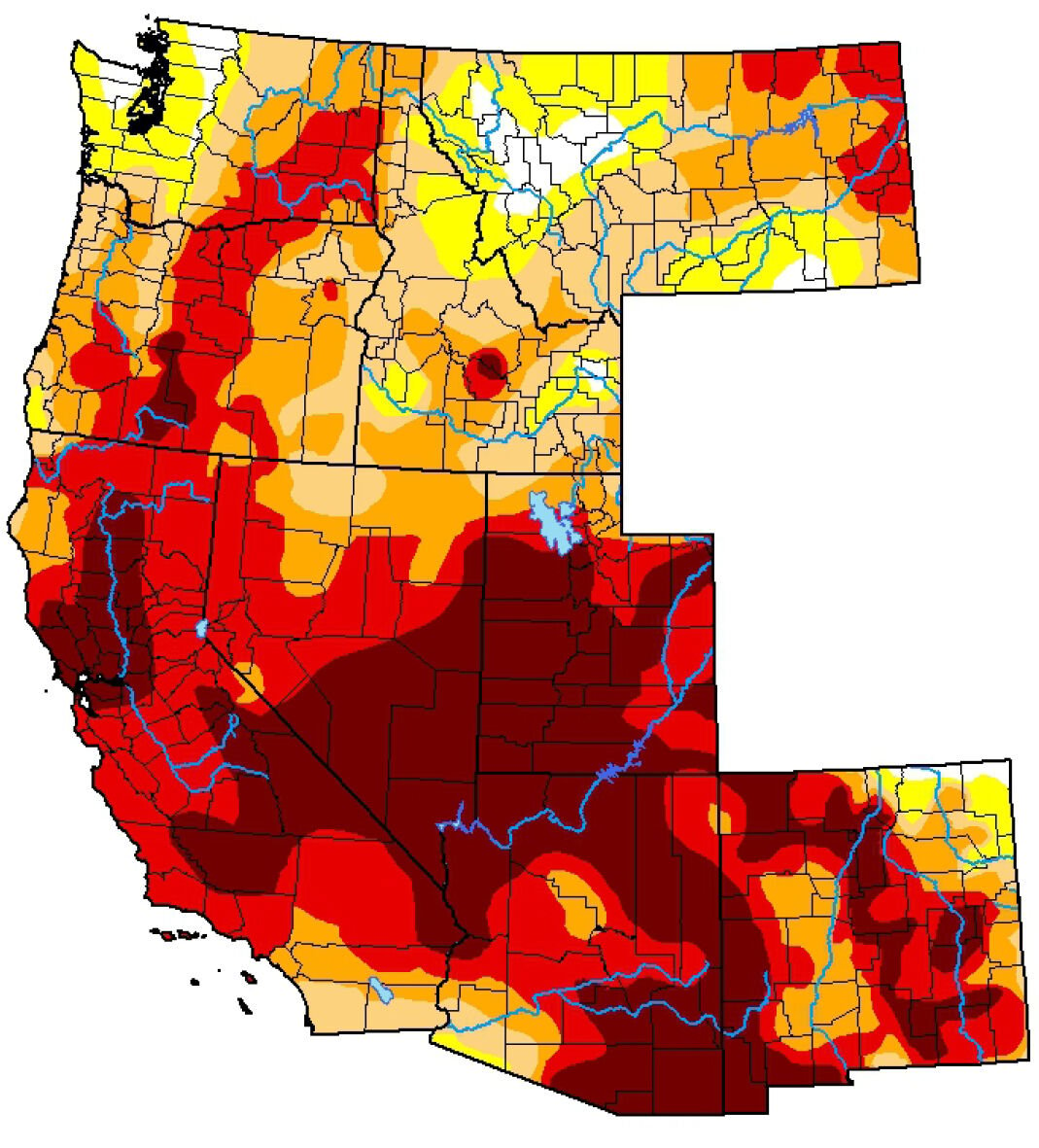 Drought conditions in the West as of June 15.

Water-management agencies responsible for operating hydroelectric generation facilities are prepared for diminished output this summer—if the power plants have not already had their output affected by ever-worsening Western drought conditions.

The Hyatt power plant, which is now operating at reduced capacity, is expected to be wholly off line by August or September should Lake Oroville levels continue receding at their present rate, according to Behzad Soltanzadeh, chief of utility operations for California's State Water Project.

"Full reservoirs provide opportunity for consistent and maximum generation of clean electricity," Soltanzadeh told California Energy Markets via email. "When lake levels are low, the amount of power generated is less and, in dry years like this year, the Hyatt Powerplant is generating at reduced capacity."

The Hyatt plant is not able to generate power once the lake level falls below approximately 630 to 640 feet due to lack of sufficient water to turn the plant's hydro turbines. Current forecasts indicate this could occur in August or September, which would be the first time Hyatt has lost total generation capabilities, Soltanzadeh said.

As of June 17, Lake Oroville's elevation was 699.27 feet, or 35 percent of total capacity, which is 43 percent of the historical average. Lake levels were high enough to avoid non-operation of Hyatt in the dry years of 2014-2015, and the California Department of Water Resources was able to maintain minimal generation during the drought of 1977, he said.

The plant will continue releasing water through the river valve outlet system, which will supply the Thermalito forebay and afterbay. The Thermalito plant, which is located downstream from Hyatt, "will continue to operate at minimum levels even if we lose generation at Hyatt," Soltanzadeh said. "Because we still must make releases down the river for water supply, environmental and fishery needs, health and safety, and Delta outflows to prevent salinity intrusion, Thermalito will continue to have limited generation."

The Thermalito afterbay water levels typically remain at between 125 and 135 feet of elevation. Water in this section of the complex is supplied by Lake Oroville and is used downstream.

These requirements are outlined in the Water Quality Control Plan for the San Francisco Bay/Sacramento-San Joaquin Delta Estuary or Bay-Delta Plan, which establishes water quality control measures and flow requirements needed for watershed protection, including of native aquatic species such as the Delta smelt (Hypomesus transpacificus) and longfin smelt (Spirinchus thaleichthys).

"In general, as total volume of water planned for releases is decreased it will reduce the number of hours per day that the hydro units are operated," Knecht said. She did not provide any specific information on the current generation decrease, if any. "Reclamation will continue to focus the production hours into the periods of highest demand and make reductions in hours where there is less need." Lake pressure at New Melones Reservoir, which powers the turbines, has been "closer to average" because lake levels are trending closer to the historical average, unlike some other major Central Valley Project reservoirs. The plant has a 300-MW nameplate capacity.

Knecht said Reclamation's California-Great Basin Region "has implemented a number of other actions in response to extreme drought conditions." These include reducing allocations to Central Valley Project water contractors; adjusting Shasta Dam operations and instituting an emergency pulse flow on Clear Creek to benefit salmon; and working on operational changes with agencies such as the SWRCB and DWR.

The Bureau of Reclamation is the second-largest producer of hydropower in the United States. Its facilities produce roughly 40 billion kWh per year.

"Reclamation scientists and engineers have dedicated their careers to water operations management and are using advanced methods combined with technical expertise to address the current and projected impacts of drought to best manage hydropower generation," Brittany Jones, public affairs specialist with Reclamation's Missouri Basin Region, told CEM. She said several facilities in that area are already operating at reduced capacity.

At the Canyon Ferry Reservoir, located roughly 20 miles from Helena, Montana, water supplies are forecast to be 49 percent of average. Releases to the Missouri River below Holter Dam are expected to be near the minimum—between 3,000 and 3,400 cfs, Jones said—for the remainder of the summer. Generation should be roughly 60 to 65 percent of average for Canyon Ferry Dam.

The Seminoe and Kortes facilities in Wyoming operated at near-average levels from October 2020 through May 2021, but scheduled maintenance at the Seminoe power plant will reduce generation starting in July.

The Buffalo Bill Dam, located in the Bighorn Basin, has four power plants that have generated about 81 percent of the 30-year average of electricity through May, according to Jones. The lower generation facility at the dam should be operating at almost 100 percent capacity through summer. The Boysen Dam power plant should operate at more than 50 percent capacity, while power generation is expected to be approximately 60 to 65 percent of average for Yellowtail Dam, which has a 250,000-kW nameplate capacity.

Jones said that in the Colorado-Big Thompson Project region, located in Colorado, only the Green Mountain Reservoir's generation has "been appreciably affected by reduced water volumes." It typically generates 1,000 MWh; however, "With drought conditions in the basin, GMR has forgone all power generation in an effort to assure that the reservoir will fill," Jones said.

At another Colorado complex, the Fryingpan-Arkansas Basin, most of the generation originates from operations at Mount Elbert. Jones said some of the water-movement operations will be halted, but Reclamation will move roughly 15 thousand acre-feet of water to generate power later this summer at the request of the Western Area Power Administration. This is intended to help during expected late-summer shortages from drought, heat, and wildfires.

The lack of surplus inflow to Ruedi Reservoir has restricted outflows typically used to generate hydropower at a facility operated by the City of Aspen. To date, runoff period outflows have been about 50 percent of normal.

About 58.2 million people in the western U.S. now live in drought conditions, according to the U.S. Drought Monitor.

Scott Coe—a public-power leader who started under the Greatest Generation, rose to leadership among boomers, and has led organizations with boomers, millennials and maybe even zoomers—joins Matthew Schroettnig. Read more